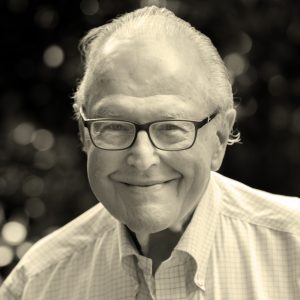 Ruel Willoughby Tyson Jr. founded the Institute for the Arts and Humanities and guided its development as director for 20 years, until 2006. He lived a life dedicated to scholarship and service until his passing on May 30, 2019.

Tyson was born in Winterville Township in Pitt County, N.C., on Dec. 2, 1930. He grew up in Greenville on the banks of the Tar River. He attended the public schools of Greenville and entered Washington and Lee University, graduating with highest honors in philosophy in 1953.

After graduation, he set out on the pilgrimage of a wandering scholar, which took him to Yale University, the Victoria University of Manchester in Manchester, England, to the University of Chicago and the University of Oxford, where he attended St. Anthony’s College to continue his work with Professor Michael Polanyi, Fellow of the Royal Society.

Tyson’s first teaching position was in philosophical theology at the Episcopal Theological Seminary of the Southwest in Austin, Texas. In 1967, he joined the faculty at the University of North Carolina at Chapel Hill in the Department of Religious Studies.

During his tenure at UNC-Chapel Hill, Tyson has served as chairman of the Department of Religious Studies and founding director of the Carolina Seminars Program. He is the recipient of the Salgo Distinguished Teaching Award and a member of UNC’s Order of the Golden Fleece, the university’s oldest and highest honor society for students and others who have made significant contributions to undergraduate education.

Below, Tyson speaks with then-Chancellor James Moeser (IAH Acting Director 2016-2017) about the legacy of Carolina. For more Good to Great at Carolina interviews, please visit the playlist here.