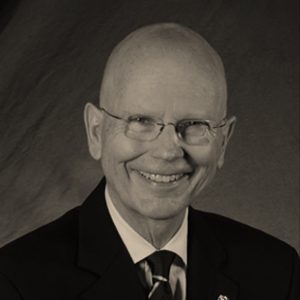 James Moeser is Chancellor Emeritus and Professor of Music Emeritus at the University of North Carolina at Chapel Hill. As chancellor from 2000 to 2008, he articulated the vision that UNC should be America’s leading public university.

At the age of twenty-seven, he was appointed to the faculty of the University of Kansas as chair of the Department of Organ. In addition, he served as organist-choirmaster of Plymouth Congregational Church in Lawrence. Over the next twenty years, he built a reputation as one of the nation’s leading recitalists, church musicians, and teachers.  As a concert artist, he was represented by the Lilian Murtagh (later Karen McFarlane) Concert Management, the nation’s leading presenter of organ recitalists. He concertized widely in the U. S. and Europe. In 1975, he became the dean of the KU School of Fine Arts, beginning a career that gradually led him into administration. In 1984, he was named to the Carl and Ruth Althaus Distinguished Professorship in Organ, the first academic dean at KU ever awarded an endowed faculty position.

Moeser left Kansas in 1986 to become the dean of the College of Arts and Architecture at Penn State University. During this time, he also served as president of the American Guild of Organists.

At Carolina, Moeser was a champion of academic freedom, defending the University from attacks against books chosen for first-year reading assignments in two successive years. In 2003, he established the Carolina Covenant, a program to provide a debt-free education to students from low-income families. The Covenant has become a national model for improving access to higher education. The $2.4 billion Carolina First Campaign, the largest private fundraising drive by any university in the South, and the fifth largest in U. S. history created 208 new endowed professorships, and 1,350 scholarships and fellowships.

The Carolina campus underwent a major transformation during his tenure, with over 6,000,000 new square feet of buildings in a $2.2 Billion construction program.  He supported critical investments in scientific research to move UNC to the very top echelon of U. S. research universities.  An early investment in genome research, for example, paved the way for UNC to become one of the major centers of cancer research in the world.

Carolina experienced a Renaissance of the arts during his administration. After the renovation of Memorial Hall, he created the Carolina Performing Arts program, which has transformed the cultural life of the entire region.

His honors include the 2001 Distinguished Alumnus Award from the Graduate School of the University of Texas at Austin; the 2007 American Council on Education’s Reginald Wilson Diversity Leadership Award, a lifetime achievement honor that recognizes major advancements to diversity in higher education; election to the American Academy of Arts and Sciences in 2007; and an honorary Doctor of Letters degree from Duke University in 2009.  He served as Interim Chancellor of the UNC School of the Arts in Winston-Salem for the academic year 2013-2014 and Acting Director of the Institute for Arts and Humanities at UNC-Chapel Hill in 2016-17.

Moeser served as interim director for the Institute for the Arts and Humanities in 2016-2017. In his honor, he has an office located in Hyde Hall.