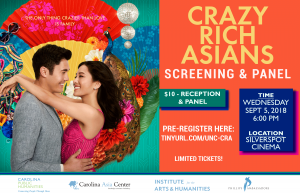 The Institute for the Arts and Humanities has a history of partnering with Carolina Public Humanities, a unit of the College of Arts and Sciences that offers engaging and innovative public seminars and lectures throughout the year. This Wednesday, the two collaborated again, this time with help from Carolina Asia Center, and the Phillips Ambassadors for the film Crazy Rich Asians.

With a $10 ticket, attendees could view the film and participate in a panel discussion at local theater, Silverspot Cinema. The event generated excitement quickly, selling out of tickets within 24 hours of the announcement.

The enthusiasm surrounding this film was no surprise. Released on August 7, Crazy Rich Asians is an American film directed by Jon M. Chu that exploded in box offices across the country with a groundbreaking $26 million in ticket sales its opening weekend. The romantic comedy follows a Chinese-American professor who travels to meet her boyfriend’s family and is surprised when she discovers they are among the richest in Singapore.

In the panel discussion, Associate Director for the IAH, Dr. Jennifer Ho joined Mary Lagdameo, Associate Director of the Carolina Asia Center, and Susin Seow, the Director of Development for Carolina Performing Arts to discuss their thoughts on the film and the representation of Asian Americans in the media. Those that weren’t able to secure a ticket were in luck. Questions could be asked for the panel using the hashtag #UNC_CRA on Twitter, and the discussion was live-streamed via the Carolina Asia Center’s Facebook page.

The Institute hopes to continue partnerships with Carolina Public Humanities, the Carolina Asia Center, and Phillips Ambassadors to further engage with the public for events with a humanities lens.