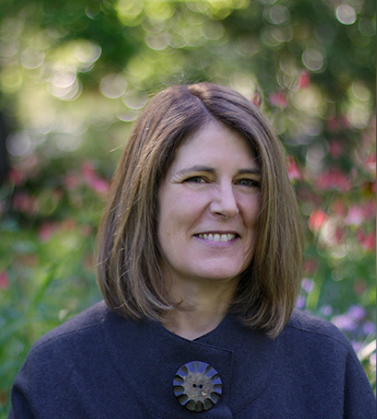 a professor of English and Comparative Literature, was named a Hyde Fellow for the Institute for the Arts and Humanities Faculty Fellowship program in Fall 2021. She has received numerous awards for her work and teaching, including the Carl and Lily Pforzheimer Fellowship from the National Humanities Center and the Chapman Family Teaching Award from Carolina.

Born into slavery, Horton was a Black poet from North Carolina and a prominent figure at UNC-Chapel Hill, known for creating commissioned poems for students. In her introduction, Richards will contextualize Horton’s life and work in relation to important historical contexts such as enslavement in North Carolina; African American traditions of writing and social protest; oral traditions of poetry and song in the 19th century; and education and community on the UNC campus before the Civil War. We talked with Richards about her work:

Q: Why did you choose to focus on the work of George Moses Horton for your latest project?

A: George Moses Horton is increasingly recognized as an important 19th-century African American poet, yet there is currently no complete edition of his known work. His experience as an enslaved field worker in North Carolina who negotiated enormous challenges in order to gain broad recognition for his poetry is highly unusual.

Self-taught, Horton is the only known poet to have published a book (he published two) while enslaved in the southern United States. He published a third book—Naked Genius—with the support of Captain Will H. S. Banks after traveling with the Ninth Michigan Cavalry, having escaped and sought their protection in Raleigh at the end of the Civil War.

My goal is to make Horton’s remarkable poetry and other writings available in a reliable edition so that interested readers can appreciate the full extent of his accomplishments, and so scholars can continue to build on this foundational research.

Q: Have you faced any challenges so far while working on this project? How did you overcome them?

A: The Wilson Library holds most of the manuscripts and other materials related to Horton, and I am deeply grateful for the assistance of the librarians and other staff members for making many of these materials available digitally, especially while the library has been closed due to COVID-19. But some research must be done in person, and COVID-related closures have slowed progress. I’m delighted that I can devote this summer to the completion of the project and plan to work in the Wilson as well as travel to other locations with related holdings.

Q: How has the IAH Faculty Fellowship been helpful to you as you do this project?

A: I am immensely grateful for the release from teaching that afforded me the time to devote my full attention to the book; I benefited greatly from the company of supportive colleagues who were also hard at work on fascinating projects. Our wonderful group facilitator, Oswaldo Estrada, cultivated a positive and respectful sense of community that grounded the weekly seminar meetings, and my fellow Fellows provided a supportive environment as I tried to figure out how to contextualize and present Horton’s life and work in my introduction.

As a white scholar working on an African American poet, I recognize the importance of responsibly situating myself while presenting Horton’s struggle for self-expression and for liberty within the constraints of enslavement and racialized oppression. My colleagues offered insightful advice and encouragement about how to meet this challenge; they provided important suggestions for further reading, and simply for how to offer a compelling entry point into the work of an amazing but little-known poet. I also greatly benefited from learning about their own work and its associated challenges. Research and writing can be isolating, and it was enormously helpful to work alongside others.

Q: What is something new or surprising that you’ve learned through your research for this project?

A: The relatively new and increasing reach of digital databases has helped open up the world of newspaper publication as never before: microfilm is no match for word-searching hundreds of newspapers simultaneously. This kind of searching has enabled me to identify many published poems by Horton, which gives us a new sense of how widely his work and reputation circulated in North Carolina and beyond.

I have also been working closely with an amazing manuscript: a transcription of one of Horton’s speeches, addressed to UNC first-year students at their commencement at Gerrard Hall. The students clearly valued Horton’s oratory, for they tried to transcribe it word for word. I am startled at how directly Horton advises the students, chastising them for not valuing the privilege of formal education which has been explicitly denied him. Titled The Stream of Liberty and Science, the speech also urges the students to realize the liberating potential of education and at least implicitly encourages them to recognize the injustice of depriving enslaved people of liberty. Especially because many of these students were the sons of enslavers, Horton’s direct criticism of systemic oppression is remarkable. The students’ laborious transcription suggests that they were receptive to his counsel.

Q: For those new to George Moses Horton’s poems, what works do you recommend they start with?

A: Joan Sherman edited a selection of Horton’s poetry that is the most reliable and current introduction to his work: The Black Bard of North Carolina: George Moses Horton and His Poetry (UNC Press, 1997). Though the introduction doesn’t account for a number of important discoveries made since the volume was published, and though the selection of Horton’s poetry is limited, it’s the best way to get started learning about Horton’s work.

The Chapel Hill Historical Society has also published a facsimile copy of Horton’s last known book, Naked Genius, that gives a fuller sense of Horton’s work at the end of the Civil War. This is a very rare volume, so it is wonderful that the facsimile is available through the Society.

Q: Given his connection to UNC-CH, what is one thing that you want the UNC community to know about George Moses Horton?

A: Horton started his career by composing poems at “the handle of the plough” for students, faculty and others at UNC-Chapel Hill. His clients transcribed his poems while he recited them; he sold the poems on commission and eventually was able to rent his time from his enslaver so that he could devote more time to his goal of becoming a great poet.

His accomplishments extend far beyond the campus, but they were grounded in his interactions with the Chapel Hill community, who both included him and helped him learn, and condescended to him and oppressed him; they both admired him and failed to recognize his accomplishments or fully understand his words. This complexity is clear from Horton’s own writings as well as student memoirs and other historical documents. Learning about Horton can help us learn about UNC’s legacy of educational opportunity and disenfranchisement.

Horton merits our recognition and admiration; we cannot rectify the wrongs done to him and the loss of what he might have accomplished under other conditions: he felt this keenly. But we can pay him belated, overdue respect and learn from his tenacious, persistent pursuit of liberty, knowledge, freedom of speech, and creative accomplishment. I’d like to conclude with Horton’s own words: a poem he published in 1865 when he was about 67 years old and had finally gained his liberty after seeking it unceasingly for decades:

I feel myself in need

Of the inspiring strains of ancient lore,

My heart to lift, my empty mind to feed,

And all the world explore.

I know that I am old

And never can recover what is past,

But for the future may some light unfold

And soar from ages blast.

I feel resolved to try,

My wish to prove, my calling to pursue,

Or mount up from the earth into the sky,

To show what Heaven can do.

My genius from a boy,

But could not thus confined her powers employ,

Would spread her wing, her power to be unfurl’d,

And let her songs be loudly heard,

And dart from world to world.

A:  To sum up, my primary goal with this project is to help Horton’s songs “be loudly heard.” At the same time that we recognize Horton’s accomplishments, though, we must not forget the unheard voices of the many enslaved people whose struggles cannot be documented in the same way because there is no written record of their words. Horton spoke of “the cause of illiterate genius”: I try to keep in mind all that remains unrecorded and unheard as I support Horton’s goal, which is a shared one that benefits all.

In addition to Richards’ upcoming book, you can learn more about George Moses Horton at Wilson Library’s Special Collection.