Dr. Stefani Engelstein is Professor and Chair of the Department of Germanic Languages and Literature at Duke University. This year, Dr. Engelstein will deliver the 25th Annual Mary Stevens Reckford Lecture on Monday, February 25.

Her lecture titled “The Opposite Sex: A History” will connect literature and science to the idea of “the opposite sex.” We sat down with Dr. Engelstein to learn more about her research and how it lead to her lecture topic.

What first sparked your interest to start working in your field?

Even as a child, I loved reading about biology and was also an avid reader of literature. I started college as a biology major before realizing that practicing science was of less interest to me than thinking about how those practices had developed and what they meant for society.  So, I switched my major to my other great love, literature. Only as a graduate student in comparative literature did I recognize the rich intersections of thought in literature and science, particularly before and during the rise of modern disciplines. I am always excited by the archival research that I do in natural history, biology, medicine, and surgery of the 18th and 19th centuries. I enjoy reconstructing the conversations that occur between scientific, literary, and philosophical texts about how humans should investigate and understand the natural world and each other.

How would you describe your research?

I work on conversations between literature and science, and the sharing of methodologies between humanities and science disciplines, primarily in the German-speaking world and in Great Britain. I am particularly interested in the period from the mid-18th to mid-20th centuries. I began my career focused on the history of anatomy and of reproductive theories. The question of how a frog embryo “knows” it should develop into a frog rather than a bird, and why a particular human embryo develops features like its parents’ obsessed educated Europeans around 1800. For scientists, literary authors, and political theorists alike, these questions were used as evidence in debates about political organization, gender relations, and religious beliefs.

After working on early theories of reproduction and heredity, I became increasingly drawn to the other fields that use or have used genealogical methodologies in the broad sense of the word — all the fields that consider their subject in terms of descent and development over time. These include not only heredity and evolutionary biology, but also historical linguistics, comparative religion, anthropology, and also race theories that scientists now disavow, but which continue to affect society. Particularly in the case of theories that have left a troubling and divisive legacy, in is important to understand how this history affects the present.

What ties does your research have to our culture and society today?

We are in the middle of a cultural shift in ideas about sex and sexuality that is visible every day.  Between the bathroom wars here in North Carolina, the ban on transsexual service members in the military that just took effect, the wave of new women legislators, and the legalization of same-sex marriage just a few years ago, the question of how we understand sex, sexuality, and the relationship between people of different sexes dominates the news.  Understanding where the “traditional” model came from and how and why it is connected to other elements of society will help us think through our own conceptions of sex and anticipate the impact new ideas will have on our culture.

What’s one topic in your recent book, Sibling Action: The Genealogical Structure of Modernity, that people would be surprised to learn?

I want to start with a fact that won’t surprise people: the methodology that led to the discovery of evolution consisted of comparing specimens in order to discover common ancestry and map out development and diversification over time. People may be surprised to learn, though, that this methodology was first developed in comparative linguistics, and was first practiced rigorously by scholars of classical literary history and Biblical manuscript history before moving into biology.

We’re so excited to have you as this year’s Reckford lecturer. Can you give us a sneak peek of what you’ll be discussing?

Many people take it for granted that humans are divided into two sexes that complement each other in a variety of ways. To the extent that other views are heard today, they are considered new, and a departure from a very long tradition. But cultural changes happen repeatedly, and the view that humanity is made up of two sexes that have opposed, but complementary characteristics is only about 200 years old. Before that in Europe, the relationship between the sexes, the concept of marriage, and the notion of what sex meant were all quite different. It wasn’t until the 20th century that the expression “the opposite sex” became more common than the older phrase “the other sex.” I’ll talk about the development of this idea of sexual opposition and how it is intertwined with everything from political order, to economic organization, to religious beliefs, and to the definition of the organism.

Bonus question: If you were a new color added to Crayola’s line up, what color would you be and why?

I like the idea of grackle as a color, as in the bird.  Grackles may appear black if you are not paying attention, but a closer look reveals brilliant iridescent colors across the color spectrum.  A scholar needs to put in hard work to earn and ground the significance of their research.  But against this ground, I always hope my work will exhibit exciting flashes of color. 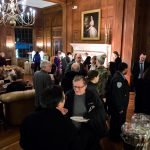 Free and open to the public, this year’s Mary Stevens Reckford Lecture in European Studies will be held on Monday, February 25 from 7:00-9:00 p.m.

Following the lecture is a public reception, which is included in the time allotment. Although tickets are free, spaces are limited. Reserve your spot by registering via the Eventbrite page here.