Music theory is not the sort of discipline that regularly makes headlines, but in the past year, it has shown up in the spotlight regularly. The catalyst for all this attention has been an increasingly passionate conversation about the discipline’s systemic racist underpinnings, its exclusionary tendencies, and how we can work to change them.  Last summer, journalist Colleen Flaherty’s headline declared it “music theory’s biggest imbroglio,” and freelance YouTuber Adam Neely has amassed over 900,000 views for his piece titled “Music Theory and White Supremacy.”

These conversations, and the concrete actions needed to address these failings, are long overdue, but the scope of the concern extends beyond the field of music theory and into the whole state of undergraduate music education.  At the heart of the situation are three questions:  Whose musics should be studied and performed in music departments?  What background do students need to succeed in college-level music studies?  And what skills, knowledge, and experiences should the study of music impart?

As an undergraduate student many years ago, I took several courses in “20th-century music,” and back then, no qualifier was needed to know that the course content covered not “music made during the 20th century” but rather a specific, extremely narrow slice of art music, composed and performed in an even narrower slice of place and culture.  Arnold Schoenberg? Yes.  The Beatles? No.  Billie Holiday or Ma Rainey? Um, definitely not.  Anything from outside the western cultural space?  Not even on the radar.

Years later I sat on a textbook review committee and heard senior scholars say that they were fine with the inclusion of popular music in introductory course because it might entice students to take the class.  Once there, they continued, the professors could expose the students to “good music,” specifically from the western canon of European art music.  One might wishfully think that such attitudes and practices were a thing of the past, but they came roaring back to public attention last summer in a peer-reviewed journal.  Such attitudes may seem on the surface to expand the range of musics taught in a music department, but, in fact, they relegate popular, vernacular, and non-western musics to permanent secondary status and end up reinforcing the primacy of largely white, western European classical music. 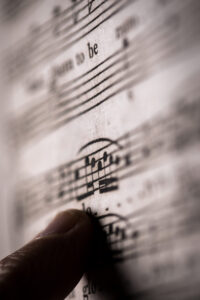 Whose musics should be studied and performed in music departments?  For too long, the answer has been that western European art music and its related traditions sit at the core of programs, and everything else is an optional side dish.  My colleagues here at UNC include renowned experts on Latin popular musics, hip hop, jazz, and many vernacular styles from different cultures, and my own research focuses on bluegrass and country music.  As a result, our department has had diverse choices for performance ensembles and elective classes for years.  But our curricular structure has maintained boundaries such that music majors with interests in those areas still must have a core focus in a more conventional art music education, especially as they take required history, theory, and musicianship courses.  Furthermore, many faculty members never get to bring their expertise into the core courses for our music majors.

The background that students need to succeed in that setting often involves a particular type of literacy and training: fluency reading western systems of notation, comfort with score-based compositions, and an intuitive understanding of classical musical syntaxes – “how a Mozart sonata goes,” for instance.  And not all prospective music students have that particular background.  Harvard scholar Ann Shreffler articulated the problem a few years ago:  “You cannot major in music because your parents did not give you 12 years of this kind of education that we implicitly require.”  Singer-songwriters, bluegrass banjo players, rappers, beat-makers, and a host of other students including those simply with less access to private formal music instruction had no clear pathway to major in music—unless they switched their focus to classical/jazz and somehow made up for missing years of prior training.  At UNC and countless institutions across the country there are eager, talented, curious student musicians who simply can’t see themselves fitting into or studying in today’s department of music.

Changing the status quo requires both that we reconsider what content we require of all music majors, and that we make space for new perspectives. Those processes often involve welcoming new experts into our faculty, even when their credentials and bodies look different than many current faculty.  We then need to ensure that those new perspectives sit on equal footing within our degree requirements.

UNC’s music faculty are currently working on a redesign of our undergraduate degree requirements, with an eye toward addressing these issues and more.  Such curricular changes would be part of a larger cultural sea change in what it means to “go to a university.”

When we founded the UNC Bluegrass Initiative five years ago, and launched the Carolina Bluegrass Band, one undergraduate student wanted to audition, but then explained to us, “I didn’t bring my banjo when I came to UNC.”  The comment had little to do with her packing choices, and everything to do with widely shared perceptions about what talents, skill-sets, and cultural identities are valued at a university, and what presentation of self is expected.  What else are our students leaving behind when they come to UNC?  And how much richer, more diverse, more exciting, and more rewarding might our department’s intellectual and creative community be when we invite them to bring their whole musical selves?