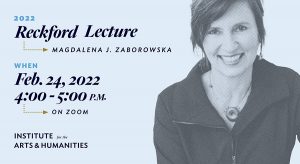 Her lecture is titled, “‘Between Home, Blackness, and Me:’ Unsettling Locations, Lives, and Archives in American Literary Studies” and will be held on Zoom. Registration is required. 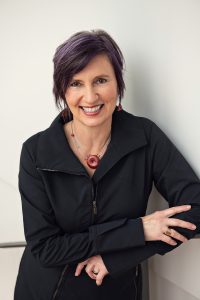 Zaborowska is a professor of African American and American literary and cultural studies at the University of Michigan’s College of Literature, Science, and the Arts. Her research includes literary and cultural studies and African American literature, with a particular emphasis on James Baldwin. Her book, James Baldwin’s Turkish Decade: Erotics of Exile, received the MLA William Sanders Scarborough Prize for an outstanding scholarly study of black American literature or culture and an Honorable Mention for the Errol Hill Award from the American Society for Theater Research. In 2018, Zaborowska published Me and My House: James Baldwin’s Last Decade in France, where she examines the themes of his works through the lens of his sprawling house in southern France.

The Reckford Lecture will see expanded programming along these themes, supporting by the IAH’s Race, Memory, and Reckoning Initiative.

The lecture is designed to appeal to the public, rather than specialists. Speakers are asked to provide “pleasure, instruction, an interdisciplinary approach and a sense of shared humanity.”